The Motet rain down the funk at New West Fest 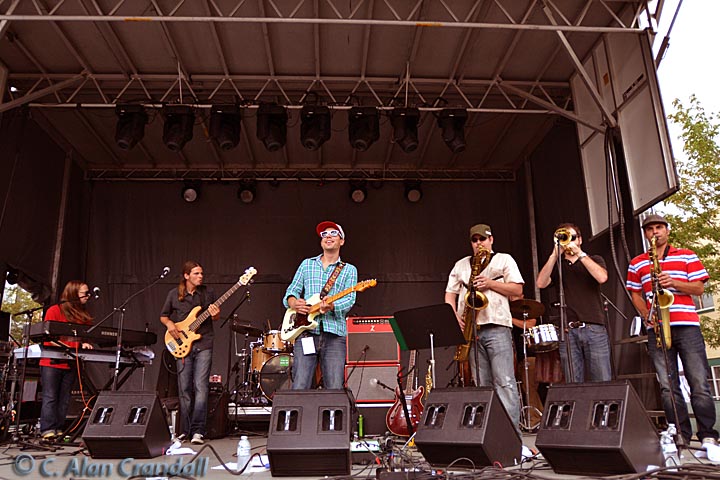 Free Motet? Really? That is a motivating thought. A seemingly endless list of task to accomplish this weekend had me not thinking about the awesome lineup of musicians performing at for the Bohemian Nights at NewWestFest. In its 23rd year, NewWestFest offered three days of free music.

It breaks my heart to think of all the awesome music I missed, G. Love and Special Sauce, Tedeschi Trucks Band, Asleep at the Wheel, WhiteWater Ramble, Fox Street All Stars, The Emmit-Nershi Band, The Otis Taylor Band and many more groups all performed free of charge for the annual event.  In fact there were over 80 bands scheduled over the three days.

The Motet, one of my favorite local bands, a had posted an event from their Facebook page, and the idea just kept rattling in my head… the Motet are playing a free show only an hour north of here. Sunday afternoon I headed up to see the show.  It looked overcast and you could see rain clouds over the mountains and I figured, what the heck, I have seen some of my best shows when it looks like rain.

It was a good thing too… the show was fantastic.  When I arrived the band was about to take the stage and there were only 75 or so people in the crowd.  Did I mention there were 9 stages at NewWestFest… so at this stage the audience was just arriving.  Then the Motet took the stage and just like that the place was packed.  I walked up to the front and had a great time my fears of rain abated up until the last song.  That is when the Motet brought the rain… just a few drops by the last song.  I heard a fan say this was the best band here! Being the only band I saw at the event I quickly agreed. The crowd cheered and brought the band back to the stage that by this time had started to get soaked with rain.  By the end of the last song, most of the crowd seemed undaunted by the summer rain and stayed till the very end.

So the Motet set was fantastic, they brought the rain… and I will drive a ways for free Motet.

Another chance to see The Motet is just around the corner.  Joey Porter announced during the show that they will be performing at NedFest in just two weeks.  For more information visit www.nedfest.com.