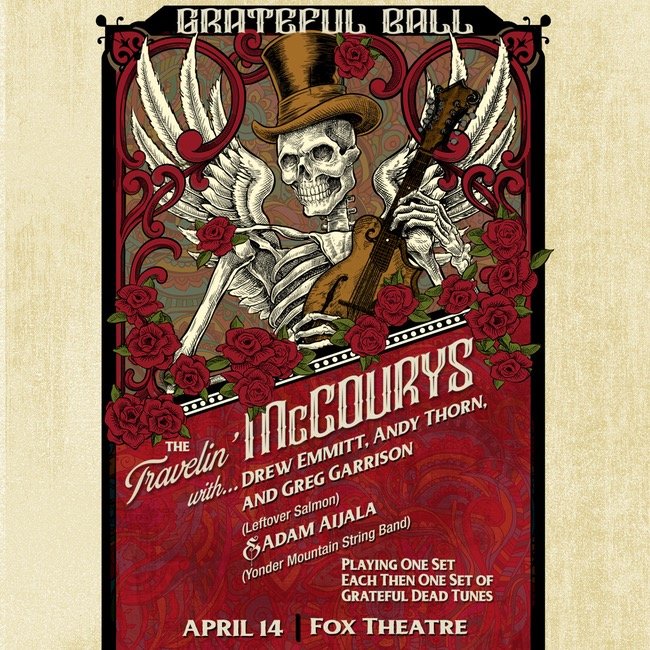 The Grateful Ball featuring the Travelin’ McCourys will come to Boulder this Friday eve featuring the Travelin’ McCourys with special guest Drew Emmitt, Andy Thorn and Greg Garrison from Leftover Salmon. And if that weren’t enough to get you up and shaking a leg, Adam Aijala of Yonder Mountain String Band will also be sitting in. This is a show not to be missed as the bands are planning on playing one set each and then a full set dedicated to the music of the Grateful Dead. The Fox Theatre will be hopping with grateful tunes.

The Travelin’ McCourys have started a new chapter in their book with the announcement that their guitar chair will be permanently filled by long-time friend and fan favorite, Cody Kilby.

It’s a fitting call, given that Kilby — a veteran of the national bluegrass scene since appearing on the IBMA Awards Show in 1993 as a member of the Bluegrass Youth All-Stars with fellow teenagers like Chris Thile — was the guitarist on the Travelin’ McCourys debut appearance at the Wintergrass festival. Since then, a distinguished and varied group of guests have toured with the McCourys— the list ranges from bluegrass stalwarts like Jeff White and Ronnie Bowman to edgier pals like Keller Williams, The Infamous Stringdusters’ Andy Falco, and String Cheese Incident’s Billy Nershi — with Kilby enjoying the role of most frequent. Kilby spent 14 years as a member of Ricky Skaggs’ award-winning Kentucky Thunder and as a sought-after studio player, most recently on Beck’s Grammy winner, Morning Phase.

The Travelin’ McCourys are made up of 80% of the Del McCoury Band, as sons of the bluegrass legend award winning Ronnie McCoury (mandolin) and Rob McCoury (banjo) continue their father’s work – a lifelong dedication to the power of bluegrass music to bring joy into people’s lives. With fiddler (and 2 time IBMA fiddle player of the year) Jason Carter, bassist Alan Bartram, and newly crowned guitarist Cody Kilby (formerly of Ricky Skaggs Kentucky Thunder), the ensemble is loved and respected by the bluegrass faithful. But the band is now combining their sound with others to make something fresh and rejuvenating. The McCourys don’t stand still, they are on the road – and online – entertaining audiences with live music that includes some of the best musicians and singers from all genres; always different, always exciting and always great music.

This may be the last fair deal in the country… grab your tickets and we will see you at the show!

Check out their version of “Loser” from last year’s Del Fest.